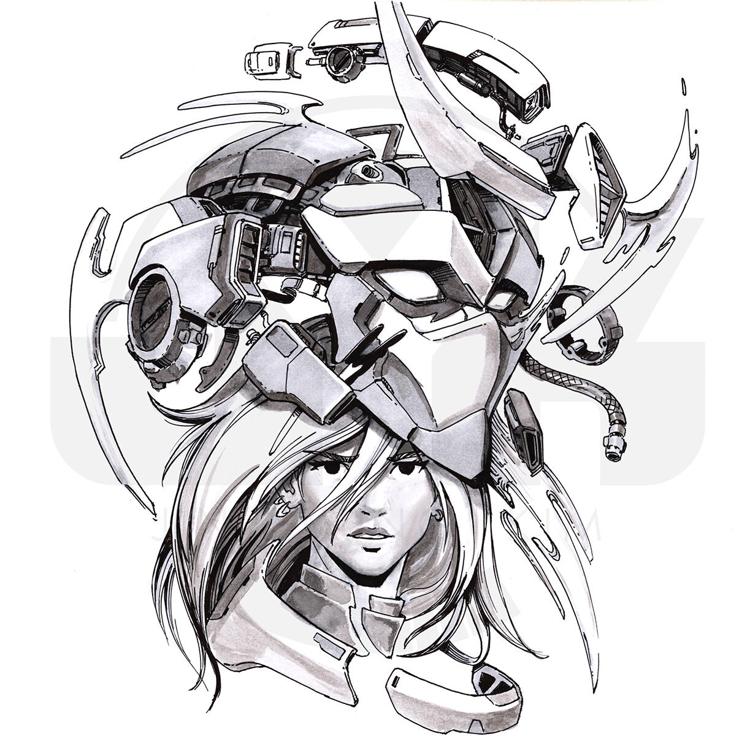 Kim has drawn for big names in video games and graphic novels, like IDW, PlayStation Studios, and Marvel

Chula Vista graphic artist Jin Yung Kim has drawn for big names in video games and graphic novels, like IDW, PlayStation Studios, and Marvel; and he’s made a splash in the local art scene as well, with his first solo show at La Jolla’s Thumbprint Gallery this spring. The lover of all things sci-fi and anime found some time to put the pens down and answer our questions about digital art, the self-promotion hustle, and, of course, giant robots.

How did you come to San Diego, and how long have you been going to Comic-Con?

I grew up around San Jose, and moved to San Diego for college in 2007. I’ve been exhibiting at Comic-Con for a few years now, but I never got to experience the days when attendees were able to just walk up and buy tickets on-site. I heard those days were glorious!

What has been the biggest break for your career so far?

Probably when I started working in the game industry right out of college. That’s one of the scariest things, coming out of school: “Will I be able to find a job?” Luckily, I was in the right place at the right time. I also got into the convention circuit, which helped me see that people were actually interested in my work enough to buy it.

Do you prefer to work in traditional media or digital?

I don’t really have a preference;  both have their pros and cons. These days I mostly work digitally due to the high volume required of working in games. Outside the workplace, I enjoy scribbling in my sketchbook. It gets my eyes off the screen after I’ve been staring at it for eight-plus hours.

Which is more challenging?

Both have their challenges. For instance, painting with watercolor—or any paint, really—is difficult for me. I haven’t given myself the proper opportunity to buckle down and practice with those tools. For\ digital works, the bigger challenge is keeping up with all the latest programs available. Technology is advancing so quickly, I want to utilize them all!

What’s been the most fruitful way for you to find work? Networking? Social media?

Definitely a mix of both. Comic conventions have been tremendous for networking with great people—fans, artists, entrepreneurs. Some of those contacts eventually turned into gigs, and even friendships. I don’t have a huge social media presence, but it has been a huge help with getting my work seen. It used to be much easier before all the algorithm nonsense was implemented; now it’s practically a second job trying to keep up with it all.

Do you have the time to do any passion projects just for yourself?

A buddy of mine, Sean, is writing the story for Techni-GAL, a character I developed. It’s our homage to ’80s and ’90s giant robot anime and Super Sentai—Power Rangers, Kamen Rider, et cetera. The project is still very much in its infancy. My goal is to have a graphic novel, and who knows where it’ll go from there?

What is it about giant robots that makes them so fun to draw?

Giant robots are my jam! What’s not to love about them? You can draw them in all sorts of crazy shapes and proportions without it looking unusual. Figuring out the function of a robot will always inform a lot of the decision making. Finding a balance between armored areas and the frame can be a fun design challenge: It’s cool to show all the inner workings, but if too much is showing the mech will be vulnerable!

What kind of project would you love to work on but haven’t had the chance yet?

One day I’d like to work on an animated feature, or some kind of sci-fi flick as a visual development artist or concept artist. Being part of building a universe sounds like so much fun. Another thing I’d like to do is create my own action figure or vinyl toy. I need more time in the day to work on all these passion projects!

In this article:Featured, TV